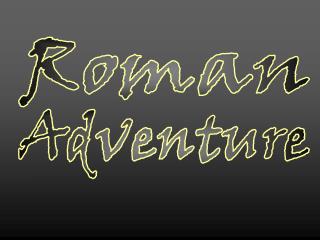 Roman. Adventure. Rules. The decisions you make as a class will either earn or cost you points. Use them wisely! Knowledge is power!. Hey, what’s up?. Citizen Maxius, you and your men are needed in the capital immediately!. Roman Sculpture - . is there such a thing as a roman style of sculpture? romans have reputation as imitators- copied many

Roman Vocabulary - . directions: copy the definitions to your vocabulary matrix. write a sentence that shows

ROMAN GODS - . by alyson tsui. the gods of

Roman Numerals - . by vicky roscoe 7nd. roman numerals are the only number system used by romans and ancient europeans as

Roman Aqueducts - . by gareth johnston. who, when, where, what, why?. who?: the romans what?: limestone arches lined up