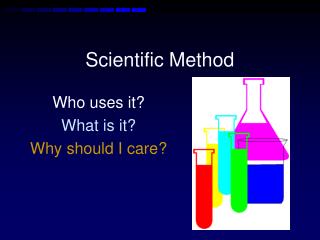 Scientific Method - . chapter 1.2. what is an experiment?. a situation where we observe what happens. start with a

THE AGE OF SCIENCE AND REASON - . this is provable using mathematics and science. physical law. a period of new

Study Materials - . good luck! rock on!. scientific knowledge and inquiry: scientific investigation. what you need to

Introduction to Scientific Visualization in the WestGrid Environment - Jon johansson what is scientific visualization?

Scientific Inquiry - . eoc review. b-1.1 generate hypotheses based on credible, accurate, and relevant sources of

General Biology Lab Exam1 Review - . covering labs 1-5 10-15 questions from each lab. scientific method. there is a