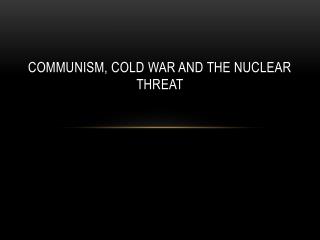 Communism, Cold War and the Nuclear Threat. Part 1: Communism and its Evolution . Origins of Communism. Communism is the political reality of a Philosophical ideal called Marxism developed by Karl Marx and Frederic Engels written in 1848. Key Concepts of Marxism. Class:

Cold War Tensions - . objectives. understand how two sides faced off in europe during the cold war. learn how nuclear

The Cold War at Home - . part 13. many americans felt threatened by the rise of communist governments in europe and asia.

What is the Cold War??? - . growing mistrust between the 2 superpowers: soviet union &amp; the u.s. iron curtain

Cold War - . eusner / gaffney/ryan vus 13a -b. what were the political, economic, and social consequences of world war

Ch 30: Kennedy and the Cold War - What did kennedy face: spread of communism threat of nuclear war the candidates:

The Cold War - . the ussr vs. the usa. canada and the cold war. the cold war was a war of words, propaganda, espionage

THE COLD WAR HEATS UP - . the space race, the arms race, espionage, and the cuban missile crisis. essential question :

The Cold War - . 7-5.1 compare the political and economic ideologies of the united states and the soviet union during