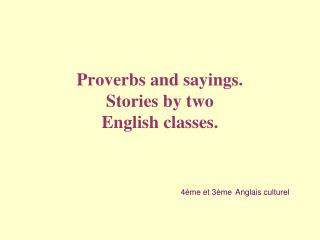 Proverbs - . an audience of one. review. wisdom- being skilled at life folly- living outside the knowledge of a god who

Proverb of the Day - . “ill-gotten gain has no lasting value, but right living can save your life.” proverbs 10:2.

English proverb - . 1. variety is the spice of life. 丰富多彩，生活才有乐趣。 2. in unity there is strength.

Vafthrudnismal and Grimnismal Vafthrudnir’s and Grimnir’s Sayings - . both poems begin with a contest or argument English and Arabic Proverbs - . according to oxford concise dictionary proverb is ‘a short saying in general use, held