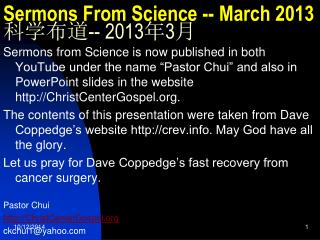 Sermons From Science -- March 2013 科学布道 -- 2013 年 3 月. Sermons from Science is now published in both YouTube under the name “Pastor Chui” and also in PowerPoint slides in the website http://ChristCenterGospel.org. South Carolina 2013 PASS March &amp; May Pretest Workshop Welcome! A draft of this presentation has been posted to