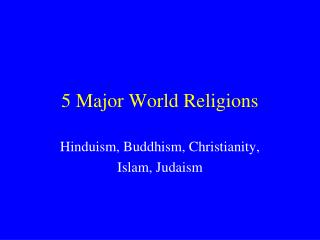 5 Major World Religions. Hinduism, Buddhism, Christianity, Islam, Judaism. Polytheism. Polytheism is the worship of more than one god. May accept gods from other religions Choose your favorite god!. Polytheism. Hinduism From India around 1700 BCE No single founder 2013 Chinese Philosophies and Religions - . what is philosophy?. literally: a love for wisdom typically asks questions

AP World History Practice Questions (M/C) - . 1. which of the following was the major effect of the neolithic revolution