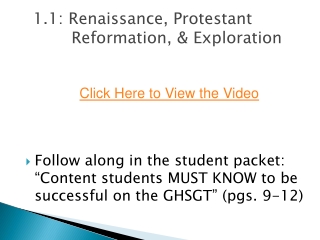 1.1: Renaissance, Protestant Reformation, & Exploration. Follow along in the student packet: “Content students MUST KNOW to be successful on the GHSGT” (pgs. 9-12). Click Here to View the Video. SS WH Standard - 9.