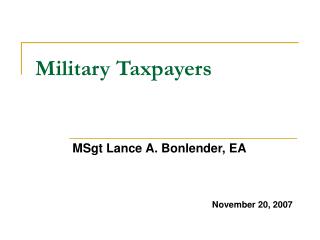 Understanding Taxpayers Rights - On the irs website you can find a copy of the taxpayer bill of rights. what is the most

OBLIGATIONS OF TAXPAYERS - . to secure tin (taxpayer identification number) before starting his/her business. only one

The American Taxpayers Party - A unity for both republicans and democrats in america. the american taxpayers party. are

Equity for Kids and Taxpayers - . agenda. who we are how schools are funded education financing history impact on kids

Military - . draft. should the government be able to draft people into the military?. background info. what happens

military - Is the best force

Military - . 3.6 politics and government. cyberwarfare. “actions by a nation-state to penetrate another nation's

MILITARY - . evolution of the military. mesopotamia (4000 b.c.)- some of the first military records come from ancient

Military - Civilian. to. military. higher education overview. this course is designed to guide you through the variety of