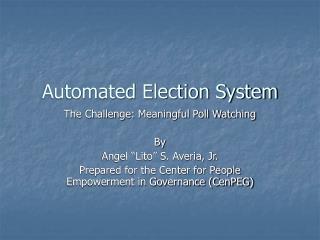 Election System - . ap government - spring 2013. motivation. “ those who cast their vote decide nothing. those who

Automated Payment System - . benefits. there is minimal training needed. no expensive equipment necessary. you can

Automated Digestion System - An automated digestion system is a machine, which automates the preparation of epa and the

Automated Collection System - . (acs). acs mission. it is the mission of acs to collect delinquent taxes and returns

AUTOMATED STUDENT ATTENDANCE SYSTEM - . presented by pulse seventeen. what it is. it is an automated attendance system