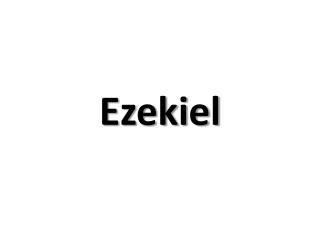 Ezekiel. http://wfallscoc.org/Ezekiel.htm. Ezekiel introduced Theophany Mission described Ezekiel d ramatically enacts siege of Jerusalem. The faithful are “marked.” The glory of the Lord leaves the Temple. The prophets and prince have failed.