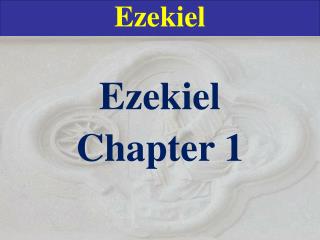 Ezekiel. Ezekiel Chapter 1. Ezekiel 1:1. The passage has a chiastic structure that focuses attention on the importance of Ezekiel receiving revelations from the Lord (2:8b—3:3). A Circumstances of the vision (1:1-3) B Divine confrontation: the chariot's approach (1:4-28)