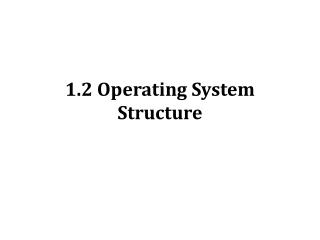 1.2 Operating System Structure. 1. Monolithic System. The earliest and most common OS architecture. Every component of OS contained in the kernel and can directly communicate with any other ( i.e by using function call). Structure of Operating System - . operating system concepts. the most important concepts related to os are given as

Week Six Operating System Structure - . the concept of loading and linking. loader – loader is a utility program which

1.2 Atomic Structure - . learning outcomes. matter is composed of particles, which may be atoms, molecules or ions.