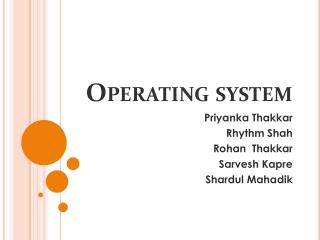 Operating system . Priyanka Thakkar Rhythm Shah Rohan Thakkar Sarvesh Kapre Shardul Mahadik. What Is It?. It is the first program to be loaded on boot. It is a software that acts as a bridge between the hardware and the applications .