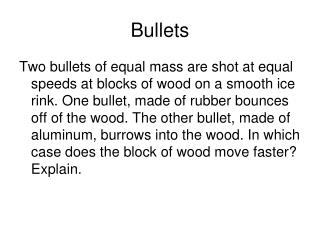 Bullets. Two bullets of equal mass are shot at equal speeds at blocks of wood on a smooth ice rink. One bullet, made of rubber bounces off of the wood. The other bullet, made of aluminum, burrows into the wood. In which case does the block of wood move faster? Explain. MOMENTUM. The Benefits of Frangible Bullets - Frangible bullets is coming up as the modern-day bullet, the bullet of choice for