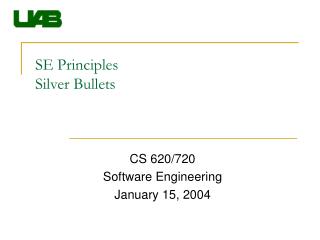 There are No Shortcuts and No Silver Bullets - . asset-based development strategies for the “the other ohio”. ned

Bullets - . two bullets of equal mass are shot at equal speeds at blocks of wood on a smooth ice rink. one bullet, made

Improving Mathematics Education in Missouri: There are no silver bullets - . barbara reys university of missouri |

From Snake-Oil and Silver-Bullets to Agile-Incremental-Iterative-Pattern-oriented* - . * sing to the tune of