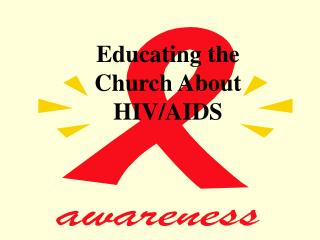 Educating the Church About HIV/AIDS Educating the Church About HIV/AIDS. HIV/AIDS A Challenge To The Church… How Should The Church Respond?. What would Jesus Do? .

Educating the Church About HIV/AIDS

“Jozi Ihlomile”: A unique model of HIV and AIDS Intervention in Johannesburg Meisie Lerutla - . regions of the

HIV Disclosure - . talking with your children and family about living with hiv/aids. questions regarding disclosure

Make malaria history - . rebuke the fever!. now simon’s mother-in-law was suffering from a high fever, and they asked

The Jesuits - Born in 1491 in spain, died in 1556knight who became a hermit and priestfounded the society of jesus (the

Excerpts from John C. Maxwell’s Leadership 101 - . prepared for aids delaware’s and naesm’s a day of healing