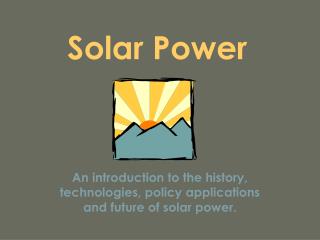 Solar Power. An introduction to the history, technologies, policy applications and future of solar power. Solar Power: A brief history. 7 th century B.C. – A magnifying glass is used to concentrate the sun’s rays to light fires for light, warmth and cooking. Solar Energy - . lecture #8 hnrt 228 spring 2013 energy and the environment. chapter 4 summary. energy from the sun this