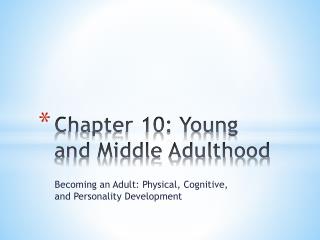 Chapter 10: Young and Middle Adulthood. Becoming an Adult: Physical, Cognitive, and Personality Development. What role transitions mark entry into adulthood in Western societies? How do non-Western cultures mark the transitions to adulthood?

19-Emerging Adulthood - Psychosocial - . early 20’s. what stage is this emerging adulthood person in? what questions

Young Adulthood - . the adult phase of development encompasses the years from the end of adolescence to death: young

Chapter 10: Socioemotional Development in Middle and Late Childhood - . mcgraw-hill. © 2006 by the mcgraw-hill

Psychosocial Development in Middle Adulthood - . chapter 16. did you know…. the idea of a midlife crises has been