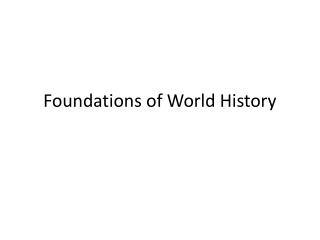 Foundations of World History. Prehistory. Key Terms. Artifacts-objects used by hominids such as tools, clothing, and weapons. Nomads-people who wander from place to place in search of food. Surplus-extra food. Division of labor-people specializing in different kinds of work. Foundations in World History - . who are we? how did we get here? where are we going?. welcome to day one!. objective: to

History of Community Foundations - . first one established in cleveland in 1914 by banker frederick goff devised as a way

Chapter 1 Foundations of History - . why study history?. marvin perry in 1988, enumerated the reasons why we need to

What is History? Unit I: Foundations of History - . on blank paper, draw by memory the 7 continents and 4 seas. label.

History of the World - . from the rise of the human race to the twilight of the old world. four themes for the course.

Eras of World History - Using the geohistogram. eras of world history. goals:. introduce students to the

Timelines of world history - My name is algis ratnikas and i was born in a refugee camp in munich, germany, in 1947 to

HISTORY OF THE WORLD - Senior english . history of the world. important dates to know:. in order to understand the

History of the World - . part i. the medieval period. from the collapse of the roman empire to the renaissance –