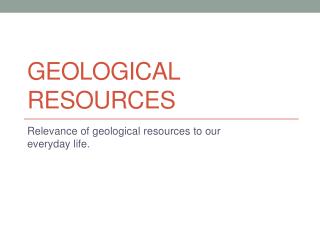 Geological Time - . relative geological time. concept that a specific sequence of events have resulted in the evolution

Geological Features - . kaleb haase. mountains. this is formed when tectonic plate move into each other and start to rise

Geological Time - . by: breann diehl. how do geologists deal with time?. relative age - geologists can tell if something

Geological Oceanography - . the scientific study of the origin, history, and structure of the earth. ocean topography.