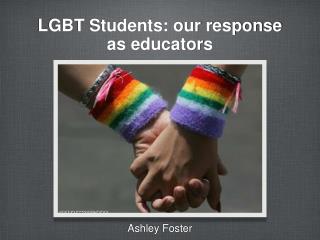 LGBT Students: our response as educators

LGBT Students: our response as educators. Ashley Foster. What is LGBT?. Stands for Lesbian, Gay, Bisexual, and Transgender individuals Sometimes a “Q” is added for individuals who are questioning their gender identity or sexual orientation. Our Goals as Educators.

LGBT Students: our response as educators

Module 6 Families of Origin and Families of Choice - . a provider’s introduction to substance abuse for lesbian, gay,

Steps to Respect : Parents and Teachers Working Together - . steps to respect at fairmeadow elementary presenters: gloria

Forced Marriage in Scotland: Our Responses and Responsibilities - . course learning outcomes. by the end of the course,

INDEPENDENT BODIES &amp; DISCRIMINATION AGAINST LGBT PEOPLE - . professor zorica mrsevic. in spite of their wish to