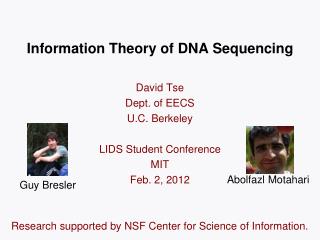 Instructional Sequencing - . by: renetta johnson. key questions. what is sequencing? what strategies are available to

Chapter 20 - . biotechnology. overview: the dna toolbox. sequencing of the human genome was completed by 2007( 3 million

DNA sequencing: Importance - . the dna sequences making up any organism comprise the basic blueprint for that organism.