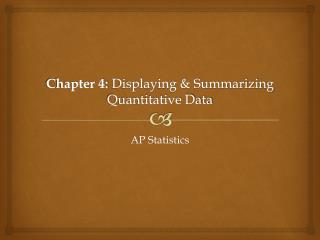 Chapter 4: Displaying & Summarizing Quantitative Data. AP Statistics. Dealing With a Lot of Numbers…. Summarizing the data will help us when we look at large sets of quantitative data. Without summaries of the data, it’s hard to grasp what the data tell us.

Chapter 2 Data Design and Implementation - . lecture 4. the representation of information in a manner suitable for

7-2 Organizing and Displaying Data p. 326 (ex.1) - Frequency table - a table that lists each item in a data set with the

AP Biology Quantitative Skills: - . ap exam to reflect this emphasis on inquiry and reasoning and the quantitative skills

Todd D. Little University of Kansas Director, Quantitative Training Program - On the merits of planning and planning for