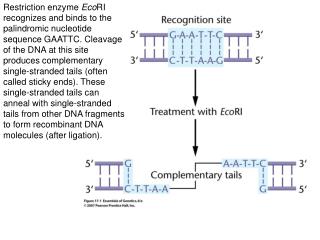 Restriction Enzymes and DNA Fingerprinting - . molecular scissors for cutting dna precisely. its because of these

Restriction Analysis and Digestion of Lambda DNA - . dna is tightly p ackaged into c hromosomes which r eside in the

Genetic Engineering - . what we can do with genes. selective breeding. humans select animals or plants with desirable

Model of DNA DNA is Comprised of Four Base Pairs - . dna restriction enzymes. • evolved by bacteria to protect against

The DNA Toolbox - . the human genome project. genome - all of an organism’s dna mapped 3.2 billion base pairs between

Stage 1: Prepare your plasmids to be cut by restriction enzymes - . obtain the plasmids (pkan and pamp) p stands for

I. Basics of Molecular Biology: DNA, RNA, Protein, Transcription, translation, Genome - Lecture 1: an i ntroduction to

Recombinant DNA Technology - . a gene must be isolated and well characterized before it can be used in genetic