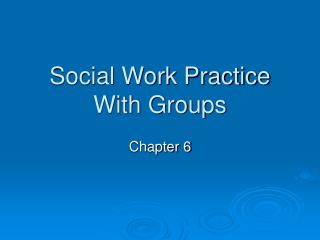 Social Work Practice With Groups. Chapter 6. Introduction . Social work with groups has played an important role in transforming the way we think about clients and about the helping process.

Psychology for Life and Work - . chapter 7 groups. groups. when i say “leader,” i mean not so much the person with

Engineering as Social Experimentation - . “to undertake a great work, and especially a work of a novel type, means