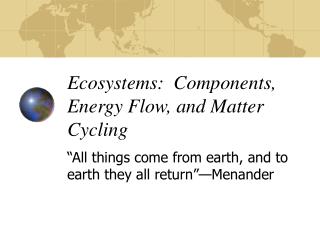 Ecosystems: Components, Energy Flow, and Matter Cycling. “All things come from earth, and to earth they all return”—Menander. Key Questions:. What is ecology? What are the major parts of the earth’s life support systems? What are the major components of an ecosystem? Energy flow in ecosystems - Lecture 6 chap. 6 what is an ecosystem? system = regularly interacting and interdependent

Energy Flow in Ecosystems - . chapter 5. the ultimate source of energy for almost all organisms is the sun. life depends

Energy flow through ecosystems - . energy flows through an ecosystem, being transferred from one organism to the next.

Ecosystems: Components, Energy Flow, and Matter Cycling - “all things come from earth, and to earth they all

Ecosystems: Cycling of Matter - . sc standard b-6.4: exemplify the role of organisms in the geochemical cycles. cn: p. nb

Ecosystems: The Flow of Energy and the Cycling of Matter - . environmental science unit 2. what is matter?. matter is

Ecosystems and Energy Flow - . by: natalie portwood and slyder welch. tropical ocean. climate- close to the equator so

Cycling of Matter in Ecosystems - . eighth grade. main idea. earth receives energy from the sun the amount of matter on

Energy flow through ecosystems - . only 5% of the solar energy that arrives on earth is captured by photosynthesis. the

Energy Flow and Chemical Cycling - . every organism requires energy to carry out life processes such as growing, moving,

Matter and Energy in Ecosystems - . biotic and abiotic factors. all things on earth fall into one of two categories: