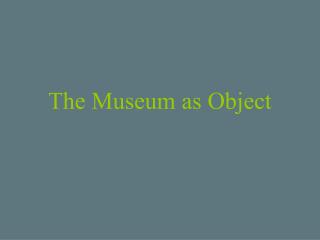 The Museum as Object. The Guggenheim Museum, by Frank Lloyd Wright, is one of the first examples of a museum designed by a “signature” architect. The term “signature architect” was not used until the 1970s, but its meaning can be traced back to this kind of commission. Introduction to Museum Education - . fundamental questions:. what is museum education? what are its historical

C. Shape object - 1. what is the name of an object inserted into a word 2010 document so that it is layered over or

Forward Air Controllers Museum - . a proposal by the ov-10 bronco association. fac museum its time has come. why an all

Museum Lives - . “the longer you’re here, the thing you realise is that these are not just objects, they’re

Museum collections data: 20 years of use and re-use online - . john faithfull (hunterian museum). why do we create

Welcome to the VIPs of History Museum! - . vips museum welcome:. today we’ll tour a museum to learn more about benjamin