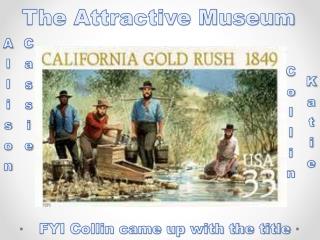 The Attractive Museum. Allison Cassie. Collin Katie. FYI Collin came up with the title. Beginning (1849-1849). Who were the key people? James W. Marshall James W. Marshall was the first man to discover gold. John Sutter The owner of the mine that the gold was discovered.

The fantastic museum - . made by kyle. the moa’s egg is the largest egg known to mankind. moa's take a few weeks to

Design Museum The - . brit insurance designs of the year. http://www.hermanmiller.com/products/setu-chairs. the setu

The Portable Museum - . what is a portable art museum? history and influence marcel duchamp fluxus inside the white cube

The Chocolate Museum - . celebrating the history and contributions of chocolate. about us. founded in 2002 founding

The British Museum - . niches with sculptures. triangular pediment. columns. symmetrical . the british museum is in the

The Pathology Museum - . welcome. welcome to the museum. this museum contains images of items in the departmental museum.

The Museum Outlet - Has the exclusive opportunity to recreate classic works of art in the form of paintings, sculptures,