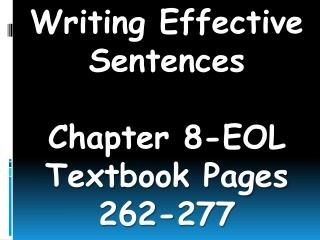 Writing for the Web: Clear and Concise - . presented by the nys forum it accessibility committee. ground rules. cell

Writing and Reading: Lesson 8 - . grade 6. warm up: homonyms. remember: homonyms are words that sound alike but have

Avoiding Run-on Sentences - . clauses. a clause is a group of words with a subject and a verb. an independent clause can

Derivative Sentences - . write 9 english sentences. use one of the derivatives on page 31 in each sentence. the

Clear and Concise Sentences Get to the Point! - . standard 8.4.7. “a sentence should contain no unnecessary words, for

Chapter 2: Pages 19-25 - . answer the following questions in complete sentences . 1 .) do you like dally more or less

Do Now! 3 sentences - . how were your snow days? what did you do? hw: advanced: “the hangman” and questions academic:

Learning How to Combine Sentences - . doc holley. why do i need to combine

EFFECTIVE SENTENCES - . what is a sentence?. a sentence contains one or more subjects and verbs, and it expresses a

Writing Effective Sentences! - . let’s look at what not to do : fragments run-on’s stringy sentences. remember…a

4 Types of Sentences - . a sentence:. a sentence is a group of words that expresses a complete thought. a declarative