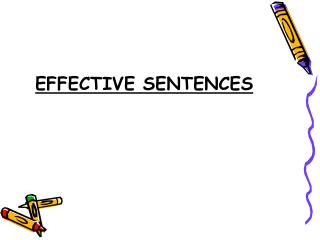 EFFECTIVE SENTENCES. What is a sentence?. A sentence contains one or more subjects and verbs, and it expresses a complete thought. The subject tells you who or what the sentence is about, The verb expresses an action or a state of being. Effective Sentences - . unity and coherence. unity ( 一致性 ). unity is the first quality of an effective sentence. a

Writing Effective Sentences! - . www.stcs.k12.oh.us. let ’ s look at what not to do : fragments run-on s stringy

Sentences - . 10/26. sentences have two parts. subject noun or pronoun answers: who or what? he autumn leaves the park

SENTENCES - . kinds of sentences fragments subjects and predicates simple and compound. what is a sentence?. a sentence

Sentences - . by: mrs. coliadis. sentences. what is a sentence? what are the parts of a sentence?. these are all