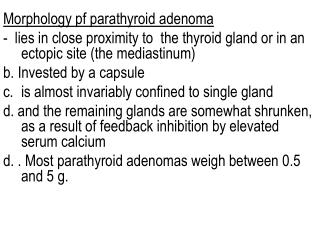 Morphology pf parathyroid adenoma - lies in close proximity to the thyroid gland or in an ectopic site (the mediastinum ) b. Invested by a capsule is almost invariably confined to single gland Thyroid: Adenoma - . lab 7, case 1. thyroid nodule note that the mass is well circumscribed and there is a sharp line of

Parathyroid Glands: - . the parathyroid glands are small in size and are found on the posterior aspect of the thyroid