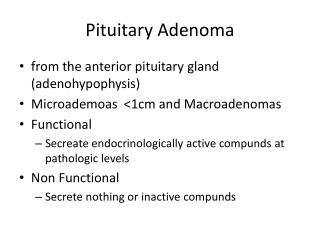 Thyroid: Adenoma - . lab 7, case 1. thyroid nodule note that the mass is well circumscribed and there is a sharp line of

pituitary - Pituitary. pituitary. these are the most common disorders of the pituitary and

PITUITARY GLAND - . where is it located??? name its’ 3 parts or sections. what hormones are secreted by the pituitary