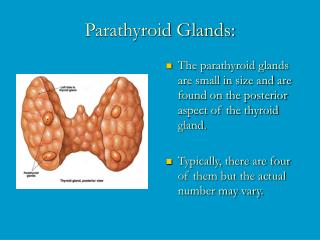 Parathyroid Glands:. The parathyroid glands are small in size and are found on the posterior aspect of the thyroid gland. Typically, there are four of them but the actual number may vary. . Histology of the Parathyroid.

Fordyce Granules - . a common condition in which small yellow dots are observed in the oral mucous membrane; these

Assessment and Management of Patients with Endocrine Disorders - . by linda self. glands of the endocrine system.

The Anatomy and Physiology of Toothed and Baleen Whales - . brunilda cruz. like all mammals…. whales breathe air into

Drugs that affect the Endocrine System - . pharmacology i. objective 1: define the term hormone objective 2: list the