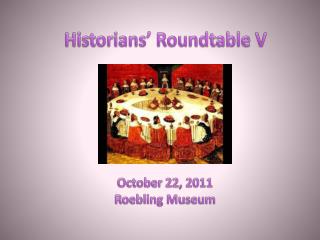 THE AMERICAN REVOLUTION - . chapter 7. the early years of the war. section 1. americans divided. american society was

STUDENTS BECOME HISTORIANS WHEN THEY DO THE HISTORY FAIR! - . you ask a historical question that you want to answer you

Goals of the Roundtable

Unit 9 Cotton, Cattle, and Railroads - Historians divide the past into eras so it is easier to identify causes and