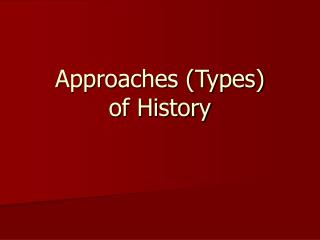 Approaches (Types) of History. The question of how a historian approaches historical events is one of the most important questions within historiography. It is commonly recognized by historians that, in themselves, individual historical facts are not particularly meaningful.

An Overview of Information Processing and Information System Types - . in order to fully appreciate how to develop

Approaches to the study of Immigration - . migration is defined as the movement of people and their temporary or