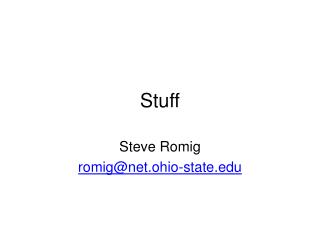 Stuff - . deadline for assn 3 extended to monday, the 13 th . please note that the testing class for assn 3 has changed.

Stuff - This is my

Stuff - . no stuff today!. last time. the complexity of binary search. started recursion by looking at what recursion is,

Stuff - . assn 5 is available and due friday, 7pm. winding down! possible remaining topics: shell and radix sorts (not on

Stuff, Stuff, Stuff What Do We Do With It??? - . presented by: brad crawford director, dgs office of surplus property