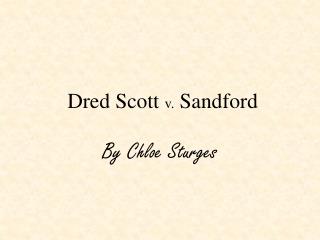 Dred Scott Decision (1857) - . dred scott. dred scott was a slave from missouri his owner traveled with scott to illinois

3. Which literary work exposed the evils of slavery? (1) Common Sense (2) The Jungle - 1. abolition, the underground

Assignment: Dred Scott - . you are a reporter for the daily comet newspaper. your editor has assigned you to cover the

Continued Increase in Tension Over Slavery - . dred scott vs. sanford case (1857). dred scott’s owner took him to a

Dred Scott v. Sandford - . the issues. could the supreme court rule on the matter? did the lower courts have the right to

The Road to the American Civil War- Day 3 - . jump start. you will have 5-7 minutes to study your manifest destiny map

Dred Scott - . by greg munetz. beginning of his life. he was born a slave in 1795 in southampton county, virginia he was

Road to the civil war - . by: d’andrea france . the dred scott case. dred scott was a slave who sued for his freedom.

The Fugitive Slave Act of 1850 and the Dred Scott Decision - . by ben burke. the situation in california. in 1849 the ca

Dred Scott - By: andrew koenig. dred scott. the trial. started suit in 1847 was for his freedom because he had an