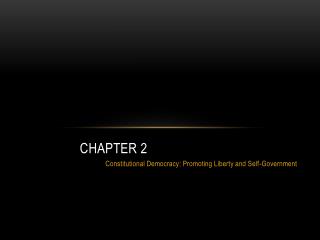 Chapter 2. Constitutional Democracy: Promoting Liberty and Self-Government. Fisher Ames. The people must be governed by a majority, with whom all power resides. But how is the sense of this majority to be obtained?. Introduction. Liberty Framers wanted to protect liberty