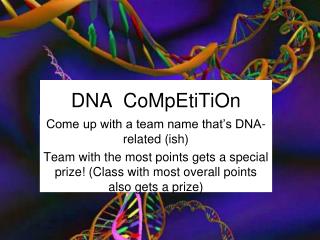 DNA CoMpEtiTiOn. Come up with a team name that’s DNA-related (ish) Team with the most points gets a special prize! (Class with most overall points also gets a prize). DNA. The information stored on DNA from one human cell. equals the amount of information in 1000, 500-page books.

Footnoting Law Review Competition Papers - . preliminary points. look it up -- even if you think you know the answer.

Footnoting Law Review Competition Papers - . preliminary points. look it up -- even if you think you know the answer.