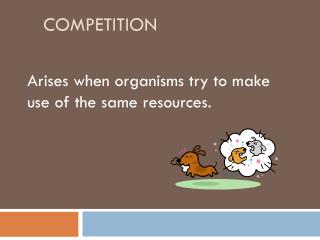 Competition. Arises when organisms try to make use of the same resources. Intraspecific competition. occurs when individuals of the same species compete for a limiting resource. (e.g. food, light, nutrients, space). Interspecific Competition.

Fitness Model Competition - Everyone needs to prepare well in order to win a fitness competition. the gorilla pit experts

7-1: WHAT IS PERFECT COMPETITION? - . competition. economists classify markets based on how competitive they are market

Oligopoly: Competition Among the Few - . assumptions for a “hypothetical”. the cournot oligopoly model. the bertrand

Price and Non-price Competition - . price competition. the main aim of businesses is to maximise profit. firms may try to

Animal Adaptations &amp; Competition - . wal : how and why do animals have adaptations?. can you explain how animals

Competition - . other types of flow meters thermal mass flow competition. gas is compressible. flow meters. all of these

What is competition? - . all living things need natural resources, but the problem is that there is not enough for

Competition - . chapter 7. how do economists define market structures?. how many suppliers are there? how large is each

What is competition? - . all living things need natural resources, but the problem is that there is not enough for

Competition - . species can compete for two resources and can coexist when 2 conditions are met:. 1) the habitat must be