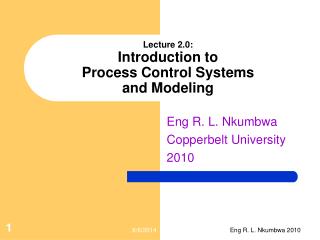 Lecture 2.0: Introduction to Process Control Systems and Modeling. Eng R. L. Nkumbwa Copperbelt University 2010. Introduction to Modeling. A system is defined as a combination of components (elements) that act together to perform a certain objective. System dynamics deal with: Systems Analysis and Design 8th Edition - Phase description. systems analysis is the second of five phases in the systems

Introduction - . the chapter will address the following questions: what is systems modeling and what is the difference

Chapter 2 Modeling of Control Systems - . nuaa-control system engineering. how to analyze and design a control system.