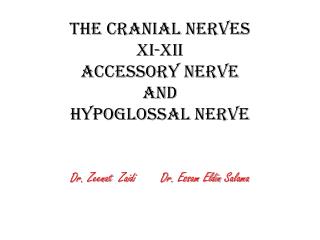 The Cranial Nerves XI-XII Accessory Nerve and Hypoglossal Nerve. Dr. Zeenat Zaidi Dr . Essam Eldin Salama. Objectives . At the end of the lecture, the students should be able to: List the nuclei related to accessory and hypoglossal nerves in the brain stem.

The Cranial Nerves - . the cranial nerves. 12 in number are part of the peripheral nervous system all exit the cranial