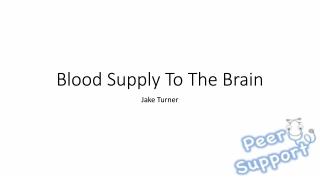 Blood Supply To The Brain Blood Supply To The Brain

Blood Vessels - . blood is carried in a closed system of vessels that begins and ends at the heart in adult, blood

BLOOD SUPPLY OF THE HEART - . dr jamila el medany. &amp;. dr essam salama. objectives. at the end of the lecture the

Cerebral Blood Circulation - . objectives. at the end of the lecture, students should be able to: list the cerebral

Arterial Supply of head and Neck - . by the end of this lecture we should be able to cover ilo: - enlist arterial supply,

The Meninges and Blood Vessels of Brain and Spinal Cord, and the Cerebrospinal Fluid - . the meninges of brain and spinal