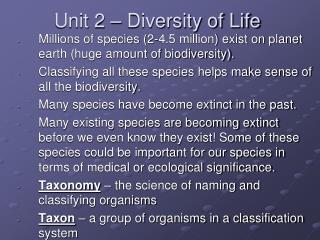 Unit 2 – Diversity of Life. Millions of species (2-4.5 million) exist on planet earth (huge amount of biodiversity). Classifying all these species helps make sense of all the biodiversity. Many species have become extinct in the past.