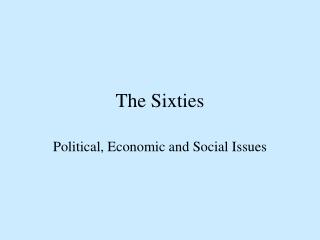 The Sixties - . jfk. jfk: wwii hero. although plagued with lifelong serious health problems, he became a naval hero in

The Sixties - . cold war, vietnam, hippies, and beatlemania. u-2 incident. may 1960: u-2 spy plane piloted by francis

The Sixties - . news . the sixties were dominated by political news berlin wall erected - 1961 there was a nuclear crisis

The Sixties Scoop - . assimilation by design : from residential schools to the child welfare system. policy of

The Sassy Sixties - . reality in the age of innocence &amp; the upheavals of a generation. the 1960 election. jfk: a

The Stormy Sixties - . 1960-1968 chapter 39. the new frontier. kennedy was the youngest president to ever take office