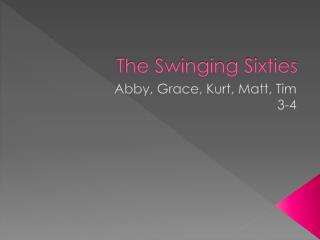 Slang In the 60s - . by: artemis, brooke, and vincent. understanding the slang. slang is an improper way of using words.

1960s - . cultural upheaval. review. what was the supreme court case that ended segregation in schools? a = brown v.

The Sixties Scoop - . assimilation by design : from residential schools to the child welfare system. policy of

The European Union - . “united in diversity”. there are 27 countries in the eu with romania and bulgaria as the last

The Stalemated Seventies - . 1968-1980. objectives. evaluate the causes for the decline in the 1970s economy. identify

The swinging sixties - . the time and place of the collector. the sixties: a social

BLACK PEOPLE IN THE USA - . the jim crow laws. until most black people were . 1863. slaves. black people had not chosen

FASHION IN THE 1960’S - . times of change. clothing in the 1960’s mirrored the prevailing attitudes of the times; the

Taste of the Sixties - . history year 8. images of the