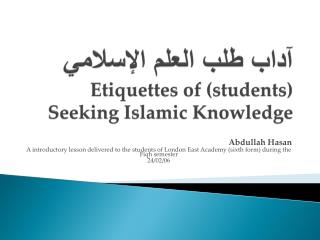 Islamic Civilization - . sol 8 . islamic civilization. the revelations of muhammad form the basis of the islamic

ISLAMIC BANKING AND FINANCE: - . what’s in it for canadian companies? mohammad fadel canada research chair in the law

Holy books other than the Quran - . islamic studies unit 11. by maria faki 10h. learning objectives. all students will be