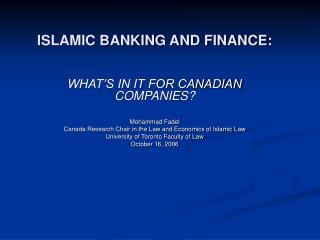 Islamic Banking &amp; Finance - . in the west with concentrated focus on the the united kingdom. dr mohammad javad

Introduction to Islamic Banking &amp; Finance - . abdulazeem abozaid. basis of ibf. islamic finance is based on

Islamic Worldview and Its Implications on Banking and Finance - . بِسْمِ اللَّـهِ

Overview to Islamic Finance and Banking - . by dr asmadi mohamed naim. objectives. to discuss about islam as the way of