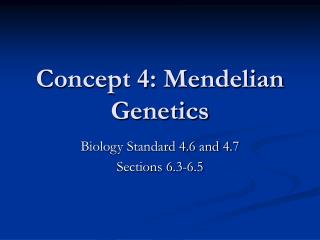 Concept 4: Mendelian Genetics. Biology Standard 4.6 and 4.7 Sections 6.3-6.5. Genetics Overview. Genes control every trait of a living thing by controlling the formation of an organism’s proteins. With the exception of gametes, each cell is diploid and contains two genes for each trait.

Simple genetics example - . albino rabbits have white coats and red eyes. this is due to lack of the pigment melanin

Concept 10.1 - . genetics developed from curiosity about inheritance. austrian monk who developed two laws of heredity in

1. Overview: Drawing from the Deck of Genes - . what genetic principles account for the passing of traits from parents to

Ch. 4-1 Mendel’s Work Key Concepts: What were the results of Mendel’s experiments, or crosses? - . discover activity:

11-3 Exploring Mendelian Genetics - . key concepts: what is the principle of independent assortment? what inheritance

Mendelian Genetics - . genetics and heredity. for a long time, general ideas of inheritance were known. =. +. +. what was

Mendelian Genetics - . genetics and heredity. for a long time, general ideas of inheritance were known. =. +. +. what was

Chapter 10 Mendelian Genetics - . gregor mendel. modern genetics began in the mid-1800s in an abbey garden, where a monk

Advanced Mendelian Genetics - . eq: do mendel’s principals of genetics apply to all organisms or just to pea plants?.

Extensions of Mendelian Genetic Principles - . chapter 4. exceptions and extensions to mendel’s rules. not every gene