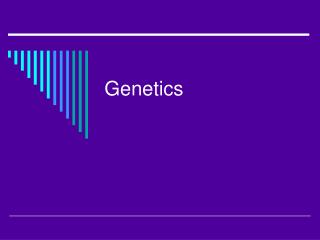 Genetics and Adaptation - . higher biology unit 2. variation. genes and inheritance shortly before a cell divides, the

Genetics - . what are the key components of chromosomes?. dna -heterochromatin -euchromatin proteins found in nucleus you

Lecture Test Packet #4 - . genetics and genetic engineering environmental microbiology. genetics is the study of how

Microbial Genetics - . chapter 7 dr. ackman. definitions. genetics the study of heredity, genes and the mechanisms that

Chapter 11 Introduction to Genetics - . cpi biology hollison high school. 11-1 the work of gregor mendel. what is